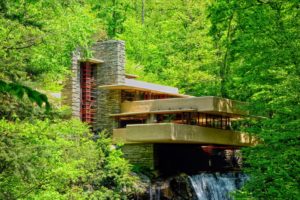 Just a few short miles from our campground is what is considered to be one of the greatest works of Frank Lloyd Wright, known as Fallingwater. He was commissioned by the Kaufmann family, a prominent family who owned the local department store. They were known for their community involvement, sense of style, and love of international travel.

Kaufmann first corresponded with Wright over his interest in Wright’s ideas for New Deal public works programs in Pittsburgh. Kaufmann had several civic projects in mind and and sought Wright’s input.

Fallingwater construction began in 1936 and was a natural extention of the shared values and connection between Kaufmann Sr., Jr., and Wright. The work provided much needed employment for local laborers. Their wages began at $0.25 per hour and the builder earned $50.00 per week.

The work was physical with pick, shovel, and horsedrawn equipment being used. Stone was pulled from the site and stockpiled for use on the house. Many people of the area began young and learned valuable skills as the project progressed. These skills would keep them employed long into the future.

Fallingwater is now known as a “living, breathing house in perfect harmony with its setting.” It’s a fascinating place to visit and a memorable piece of American Archetectural history. You can read more about it here > www.fallingwater.org